Believe it or not, there was a time when you could because it wasn’t specifically against the rules. That changed on 1st May 1985 after the Annual General Meeting of the International Squash Rackets Federation in October 1984. 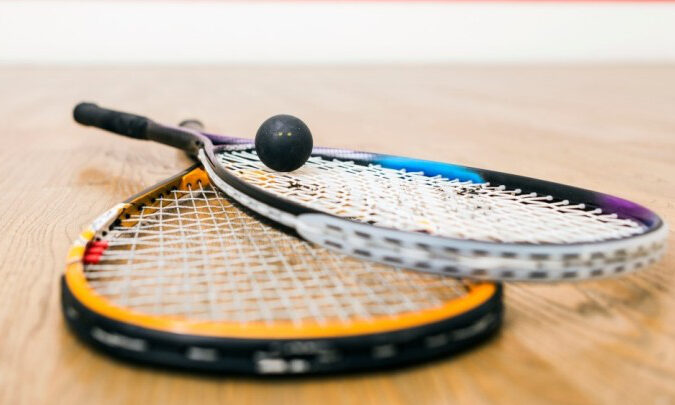 One racket EACH, thank you very much!

And after the meeting it said:

The game of squash rackets is played between two players, each using a standard racket…….

So, there you go: No, you can’t use two rackets at the same time. Even if you could, you would have to be very good with both hands to even try. But, perhaps we should ask the question…

Would Using Two Rackets Be Better?

Just like the article about swapping the racket between your hands, it raises the question of “would it be better?“. Well, the first issue is to realise that you would have to play forehands on both sides. For most players, the forehand is the side that allows them to hit the ball harder, but is it more accurate? Not for me, but I might not be representative of club players. Another racket would definitely be in the way in this situation!

The second point is one of safety. Holding a second racket would make many club matches dangerous. It can be hard enough to avoid your opponents’ rackets when they have one, imagine with two! You would have to put it out of the way for each shot and it would limit your ability to reach and balance yourself, or at least it seems like it would.

You know what? The next time I go on court, I’ll try it and report back here.

Questions like these are asked in sports centres around the world by new players. It’s natural to want to push the boundaries and find new tricks to win matches. Of course, after you have been playing a few years, many of the thoughts and ideas you had when you first started may seem naive, but they are valid questions.

If you have just started to play squash, why not view my Squash For Beginners playlist on YouTube? The video below is taken from the series.

Thanks to Andrew Shelley of the World Squash Library for clarifying the rule change for me.

« Previous: Squash Match Preparation: You Are Not A Robot
» Next: Using The Full Height Of The Squash Court
? Random: Take A Chance!
✓ Popular: Why Do Pro Squash Players Rally To The Back So Much?