Some time around April of 1985, I was in my friend's apartment when he said to me "Start training. We're gonna break a world record!"

Apparently, he and my cousin had been organising it for a few weeks but had neglected to tell me anything about it.

I suppose I should be grateful they didn't just knock on my door on the morning of the event and tell me.

Between 8 November and 13 Novmber 1985, myself and Amir Shaikh, played squash for 122 hours and 44 minutes to enter our names into the Guinness Book of World Records for the Squash Endurance event.

It was an event that truly changed my life and direction, but at the time I had no idea what a catalyst it was.

The rules, at the time, for these sorts of world records were that the players were allowed 5 minutes rest for each complete 60 minutes of play. These breaks were allowed to be accumulated to whatever the players wanted. Therefore we often played for 6 hours and then had a 30 minute break, during which time we showered, not because of the sweat, but for the simple pleasure of feeling fresh, had a pee and ate something.

I think there was one time we played for 12 hours and took 60 minutes break and even tried to get 40 winks but we just couldn't sleep - probably fear we would feel even worse once we woke up. You know that feeling - the alarm goes off in the morning and you press the snooze button and feel twice as bad as you did 5 minutes ago.

Somebody had to be there 24 hours per day, recording the games matches, breaks etc and we recruited a great bunch of people, whose names I am afraid I have forgotten. They took it in shifts and signed the book we used for recording everything.

About 5 years after we broke the record Guinness decided to "retire" the sports endurance records and they no longer appear in the book. One person died attempting one, although I don't know for sure if that affected the decision.

It's at this point I would like to apologise with all my heart for the lack of photographs.

We had a couple of people taking photos all through the event and Amir gave me the printed versions and the negatives.

I have moved a lot during my life and somehow they got misplaced during one of those moves.

It's a shame because hundreds were taken and some probably were pretty good.

All that remains are the cuttings from the newspapers, some of which I have posted here.

In the very highly unlikely event you were at squash centre at the time and have any photos PLEASE contact me.

Wembley Squash Centre was the location of the event and it was perfect. Situated next to Wembley stadium, it housed approximately 20 squash courts, one of which was the show court.

This show court had sitting for perhaps 150 people, with a viewing gallery around the front and side walls. At the time, squash was so popular that all the courts were booked from 5:00pm until 10:30pm and players would come in and put their name on a waiting list in the hope of a cancellation.

The centre stayed open all during the night to allow visitors to the event at any time, although access was only granted to view the show court.

About a year after the event, I became the centre's coach and that's where I began to learn my trade.

I was more extrovert than Amir and he stayed much quieter than I during most of the event. perhaps that's why he started having hallucinations about two thirds the way in. I certainly wouldn't trust my memory at the best of times and to rely on it during this period would be the height of stupidity but here I the ones I think I remember. I present them here in the order I remember them, not in the order they happened at the time.

In addition, I want to be clear and say that whilst all the stories below related to Amir, I am sure i had some "episodes" myself but none can be recalled. Therefore, it seems that Amir was the only one who went "crazy" and for that biased slant on history, I both laugh and apologise.

The tables in the restaurant

Suddenly, Amir, started running around the court in these strange configurations. Upon my politely asking him "What the f&^k are you doing?", he told me he was avoiding the tables. Trying to keep a straight face, I naturally asked "What f%*king tables?" (yes, I did swear a lot in those days - it was considered "cool"). Anyway, it transpired he thought we was in a restaurant and was trying to avoid the tables. Can't remember how long it lasted, but I don't think it was very long.

We were sponsored by Unsquashable for the event and were given plenty of kit, shoes and rackets. Out of the blue, Amir asked me something about my racket and how cool it was that they made them out of paper. For the next hour or so, he seemed completely obsessed with his racket and between rallies would try to discuss the finer points of Papier-mâché racket construction.

The purple monster crawling up his arm

Without warning, Amir started screaming and running around - actually much faster than when he was chasing a ball - he never liked to run, even in those days. He stopped and shouted something about a little purple monster moving up his arm towards his shoulder. He even tried to brush it off. I have no idea how long this lasted or what we did to stop it. I like to think I slapped his face in dramatic fashion like in the movies to stop people panicking, but I suspect it just passed and we carried on.

At the time the Wembley show court was one of the best courts in the country. It had a glass back wall, with a lot of seating, a balcony around the side and front walls and most importantly a photographers pit. The pit looked out from a glass window under the "tin". This was for photographers to take pictures during play without disturbing the players.

Anyway, one time, Amir asked me what time the postman was due?. I have no idea what I said, probably something rude and with lots of swear words in it. For the next 15 minutes meeting at various intervals, he would rephrase the question. It was always about the postman. I am sure I finally cracked and asked (read: SHOUTED) "WHY?" He looked at me in all seriousness and said something like "Because I can't wait to see the letter that comes through THAT letterbox".

Now that I have started writing Amir's hallucinations, I do remember one of mine. On the tin was the word "Wembley". Well, I distinctly remember seeing that for 5 days and towards the end I was convinced that somebody had sneaked in during a toilet break and repainted it. But spelling it wrongly. That final E began to stand out as added. Sounds silly but it really felt wrong.

I distinctly remember trying to eat a meal of "meat and two veg" one time but I couldn't force it down. After that we just ate snacks and probably lots and lots of caffeine! Of course, we tried to drink a lot of liquids too.

Sports drink weren't very common back then in the UK, so it must have been water and Coke I suppose.

We had regular visits from Jahangir and Rahmat Khan. Rahmat made us lie on the court floor with our legs vertical against the court walls. He said this was important because we were standing so much. I have no idea if it was important but it made sense!

After we finished the record, I wanted to break the other racket records and tried to find a proper sponsor for us to train full time. I had no experience in that sort of thing and it came to nothing. The most impressive one was for table tennis which i think was nearly 220 hours!

Well, there you have it

I could probably go on and on but what you have here are the basic details. Hopefully, you enjoyed reading it and if you have any questions, please send me an email. 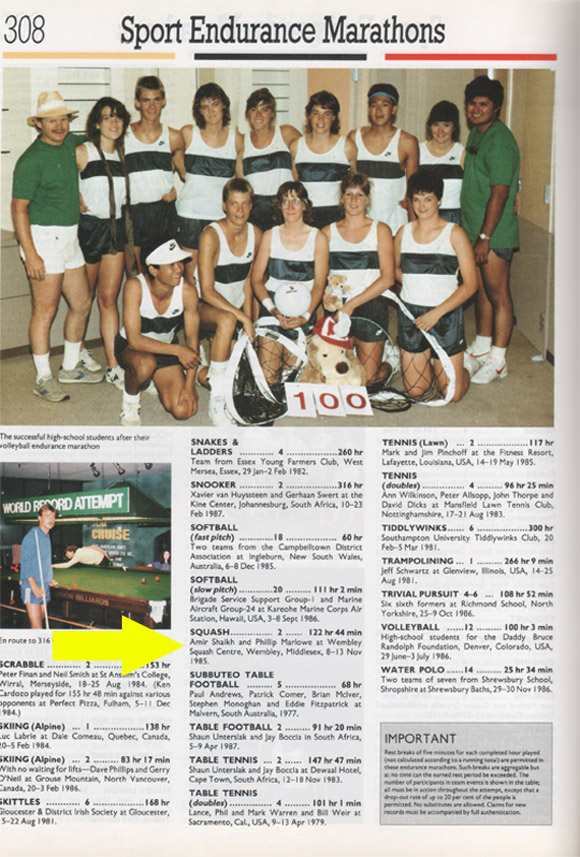 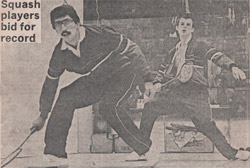 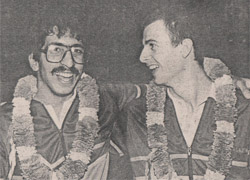 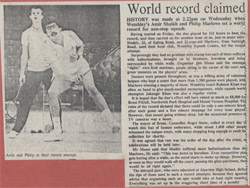 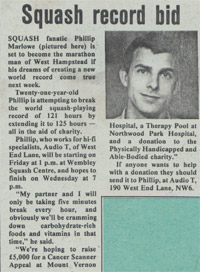 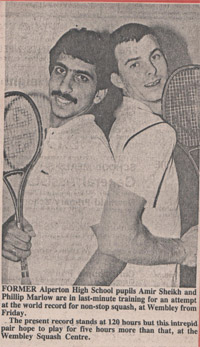 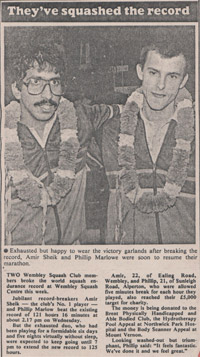 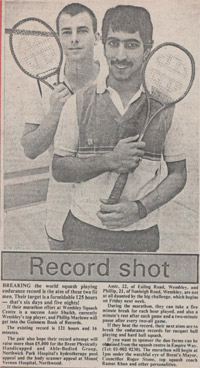 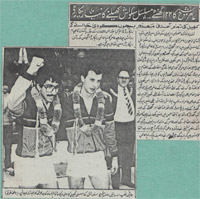 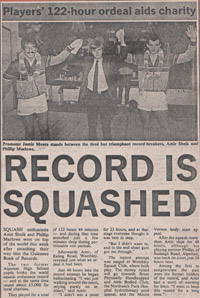 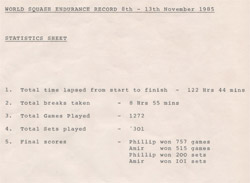